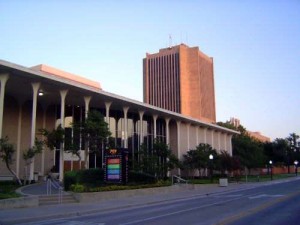 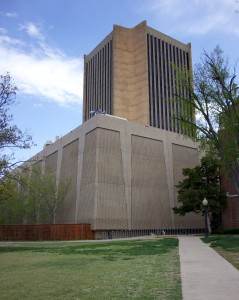 The Physical Science Center, or the Blender, is one of the more recognizable buildings on the OU campus. Standing on the South Oval looking north, my eye at least is immediately drawn to the two tallest buildings– the Blender and Sarkey’s. It’s so named because of its industrial appearance– there are rumours that it was built to be riot-proof–  and the interaction between the wide base and the slimmer tower that honestly do end up looking a bit like a blender. All that said, it’s one of my favorite buildings on campus. I’ve had a math or science class there every semester and the Blender echoes my feelings on the subjects- intimidating and stark, but you can find a place there. Although I was nervous the first time I walked in for Calc 1, the feeling soon disappeared as I took more classes there and began to think of it as a place for learning and discovery. The same vertical lines on the tower that draw your eye up, giving the building more height than it has, felt like a testament to the world of math and science, where there’s always more to be discovered or invented. I have favorite benches and know all the water fountains ranked by temperature, and which lecture halls have outlets under the desks. The Blender houses the math and history of science departments, and it’s hard to not draw the parallel that we hope math and science are as resilient as the Blender.