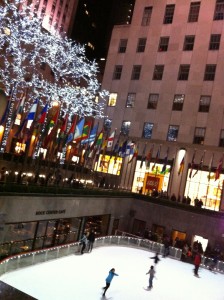 I didn’t get to spend nearly enough time here. I would have loved to join the crowd of people enjoying a New York City evening at the Rockefeller Plaza ice rink. It was below sidewalk level, so one could look down into a new world. It felt like a friendly place with all the world flags and interesting things to look at. Then I went inside the Rockefeller Building, which was once the tallest building in the world. 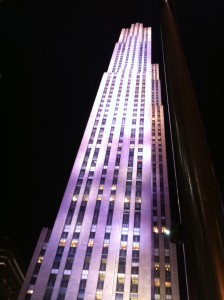 See how I couldn’t photograph the whole building at once? This was before panorama existed on iPhones. The elevator ride was fast and clear to the outside, so my friends and I could watch the journey. It also had fun multi-color lights. I recommend chewing gum while riding because your ears will need to pop very quickly! 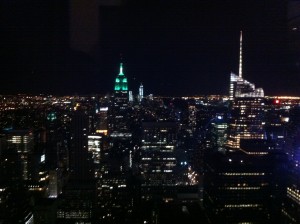 At the top, there were some escalators that led to the “outdoor” observation decks. There were thick glass panels, which made it impossible to take good pictures! The thin lines between panels made it windy and cold too. The Empire State building has green lights in this picture. On other parts of the deck, I could look out at the water (which was recognizable because it didn’t have lights) and see the Statue of Liberty. I think visiting during the day would have been interesting for comparison.

Considering the building and the Plaza, I liked being in the Plaza better. The view was nice from the Top of the Rock, but this was the perspective of the ultra-rich John D. Rockefeller, which I just couldn’t relate to.

One thought on “Rockefeller Center and Plaza”