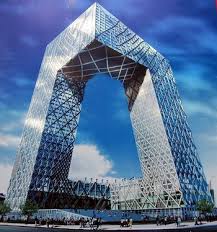 The pictured building is the Central China Television headquarters, designed by Remount Lucas “Rem” Koolhaas located in Beijing, China. The project took 8 years to complete, with construction spanning June 2004 to May 2012. The noticibly irregular shape of the structure has been the topic of some discussion. Locals refer to the building as “big pants”, and one critic suggested the building was modeled after an image of a woman on her hands and knees, which has been officially refuted by Koolhaas. The building is considered a clever combination of Chinese ingenuity and European creativity, Koolhaas himself called the building a hybrid, stating the building “could never have been conceived by the Chinese and could never have been built by Europeans.” In 2013, the CCTV Headquarters was awarded Best Tall Building Worldwide from the Council on Tall Buildings and Urban Habitat.