Unity Temple was constructed in Frank Lloyd Wright’s home town of Oak Park, Illinois. The building was commissioned by the congregation of Oak Park Unity Church. Wright had many personal ties to the congregation, including his mother, who joined Oak Park Unity Church previously, and his father, who was a Universalist preacher. The church burned down in 1905, and Wright was awarded the commission to design a new building. The minister of the church wanted a modern building that embodied unity and simplicity. 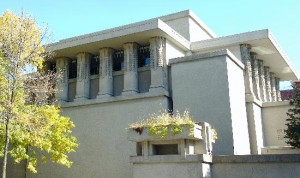 The design that Wright made for the church was significantly different from typical church architecture. The material was concrete, which was left uncovered. The church is located on a busy corner, so is built to be a sanctuary from the noise outside. The outside is plain, an almost impenetrable concrete box. The only opening is a band of high clerestory windows, which are recessed into the building. Unity Temple is connected by a hallway to Unity house, a secular space with meeting halls, open classrooms, and multi-purpose rooms. The entrance to the church itself is from this hall. One must pass through several dark passages before entering the bright sanctuary inside. The clerestory window surround the room, and Skylights made with amber-tinted glass are set in the ceiling, to give the impression of warm sunny light, even when it’s actually cloudy outside. The building certainly did embody the principles of unity and simplicity, and is still used by the congregation today. 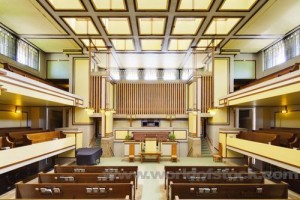 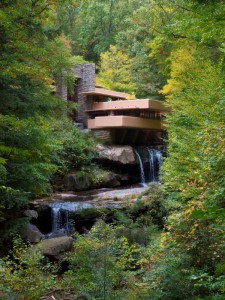 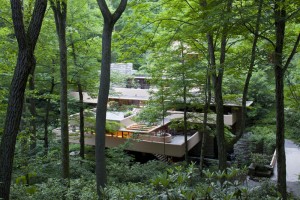 Wright’s hope for Fallingwater was to integrate the house with the surrounding nature. The focus is not on the inside of the house, but on the natural beauty outside it. The ceilings are low to direct attention horizontally toward the outside. The outward facing walls have expansive windows, while the hallways are dark and narrow, giving the feeling of being in a sheltered cave. The exterior of the house makes use of all the space available, with long horizontal terraces stretching out over the water. The exterior colors of the house blend with the rocks and trees around it, and the house ultimately adds beauty to an already beautiful location. 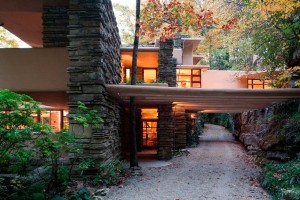 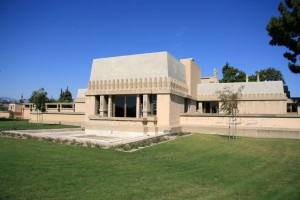 The Hollyhock house was completed in 1921. It was the first project Wright did in Los Angeles. It was built for Aline Barnsdall. Initially, the house was designed to be the center of an arts complex, with a theater, director’s house, dorms for actors, art studios, and shops. However, only the man home and two secondary residences, one of which has since been demolished, were built. Today, the Hollyhock house is in use as a public art park after being given to the city of Los Angeles by Aline Barnsdall. 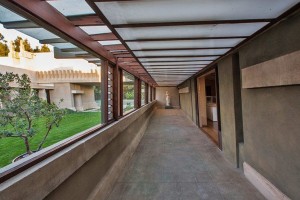 The Hollyhock house is named after Aline Barnsdall’s favorite flower, and Hollyhocks were incorporated into the decorative aspects of the house. The house itself features a large number of outdoor spaces and gardens. Most indoor spaces are adjoined to outdoor spaces. There is also a central garden court, as well as rooftop terraces from which the L.A. basin and Hollywood Hills can be viewed. 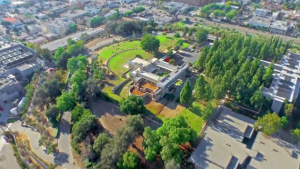 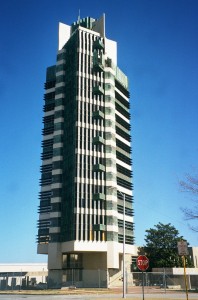 Price tower is one of Frank Lloyd Wright’s more famous works, located in Bartlesville, Oklahoma. The tower is 19 stories tall. It was originally built for the H.C. Price Company, and housed company offices as well as offices for other tenants, shops, and apartments. Today, the building is owned by the Price Tower Arts Center, and is still a multi-purpose building. The primary tenants are the arts center, a hotel, a restaurant, and a museum. The building has been designated a National Historic Landmark.

There are several innovative features of the design of the building. The tower was initially designed to be an apartment complex in New York City, but that project never materialized and the designs were modified for the Price Tower. The tower was nicknamed by Wright “The tree the escaped the crowded forest”, because it got out of the crowded forest of skyscrapers in New York to be the tallest building in Bartlesville. The design also has tree themes. The trunk is four elevator shafts in the center, which are anchored deep underground like a root. The floors are like the branches, and the walls hang from the floors, allowing for big windows. The building is also asymmetrical, so that it looks different from different angles. 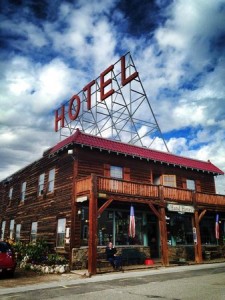 The Hand Hotel is a hotel in Fairplay, Colorado. It was built in 1931, by Jake and Jessie Hand, and has become a central building in Fairplay since then. My experience with the Hand Hotel has been only through Fairplay Burro Days, when my family goes to Fairplay to take part in a weird event called burro racing where you race up a mountain pass while leading a donkey. Anyway, the race starts and ends in front of the Hand Hotel, and event officials call out announcements from the deck of the hotel throughout the day. After the race, the hotel hosts a banquet for all of the racers and volunteers.  The building is particularly memorable to me because it is at the center of what has been the best part of the summer since I was 7. For someone who’s never actually stayed at the Hand Hotel, I’ve spent a lot of time there.

The building itself is interesting for a number of reasons. For one, the giant “Hotel” sign makes it the most noticeable building by far in Fairplay, a tiny mining town with a population of less than 1000 people. The inside of the building is warm and cozy, with a fireplace and a sunroom, and all the rooms have various old west themes. Like a lot of old buildings, it’s also widely believed to be haunted. People have come up with all sorts of spirit encounters, from a biting demon dog in the basement to “grandma hand” who just wants to make sure that her room stays tidy. I’ve certainly never seen a ghost, and neither has anyone I know personally, but the stories add to the interest of the building.

Devon Energy Hall is one of my favorite buildings on campus, and one of the buildings that I spend the most time in. There’s nothing really spectacular about it, but it’s definitely built to be a good place to get stuff done. The abundance of windows make it very bright and pleasant inside. It’s definitely one of the better places to work through a long problem set because it doesn’t feel like you’re locked away in some sort of dungeon doing endless calculations. The building is also designed to encourage collaboration, with big tables and well lit team meeting rooms on every floor. 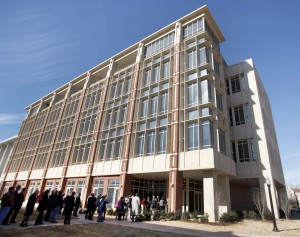 Another really cool feature of Devon is the deck on the top floor. The deck is sheltered from any weather except for wind, and has an amazing view of OU’s campus, particularly the stadium. This deck provides a nice spot to be outside, but have some protection from the elements to make it a better environment to study in. 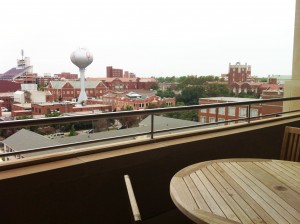 Though I haven’t been there in a while, I spent a lot of time in this building during my first two years of college. I spent countless dark mornings and sunny afternoons in the boathouse, or at least rowing past it. The building was designed by Rand Elliot, and has become a landmark along the Oklahoma River. 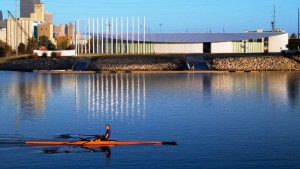 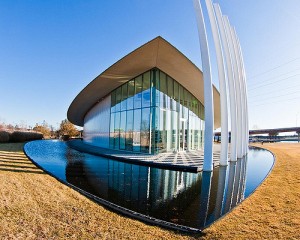 16 vertical posts positioned along the river side of the building are meant to look like giant oars, and the building is shaped to resemble a rowing shell. A reflecting pool surrounding the “bow” makes it look as though the building is floating. This side of the building houses offices, lockers, and a workout room full of ergometers. It’s completely surrounded by windows, making the inside pleasant and well-lit. I guess they even rent out the space for events and weddings, although it’s weird to think that people might go to a wedding in a room that’s usually used to work out in. In any case, the boathouse is a beautiful building that holds a lot of really great memories from my first few years of college.

I spent the fall of my sophomore year in Dalian, China. While most of the buildings I spent a lot of time in were unremarkable classrooms, dorms, and coffee shops, there are several buildings that stuck in my mind. One such building is the 创新园大厦 (Innovation Building) at the university where I was studying, Dalian University of Technology. The building was built in 2004 to be used by the schools of computer science, math and physics. It includes shared spaces to encourage interdisciplinary collaboration. Even though I never had much reason to actually go inside the building, its massive presence makes it the most memorable building I encountered during my daily life in China. 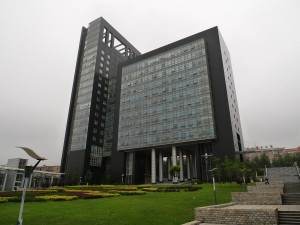 The building was located across the road from the dorm-like hotel where I spent the semester, and it was one of the first things I really noticed when I first arrived on campus. This 16 story, completely black building, located at the highest point on campus, was certainly an imposing presence and instilled a certain sense of awe. I distinctly remember walking by this building on my first day in China, and feeling very small and a little terrified under the shadow of its giant black walls, yet excited to be in a place that felt so much bigger and more inspiring than any place I had ever seen. As I got used to life in China, it also became an important landmark because even in a sea of really big buildings, it manages to stand out. 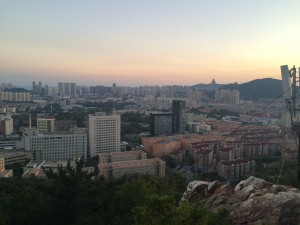