Over the summer, I had the amazing opportunity to study abroad in Italy for a month. Near the end of our trip, we visited Rome and the Vatican City. The most impressive building I saw while in the Vatican City was not the Sistine Chapel as I expected, but St. Peter’s Basilica. 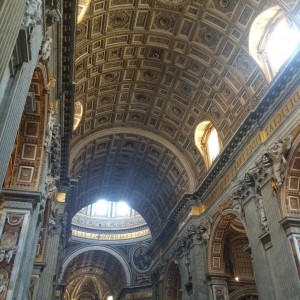 St. Peter’s Basilica can only be described as awe-inspiring. From the moment my group walked in, a hush fell over our group. I was spellbound by the high ceilings, particularly the rotunda that is so common in Roman architecture. The gold in the paint (unfortunately not as apparent in these pictures as in person) made the entire room sparkle. Large marble statues littered the room, and intricate paintings covered the walls and ceilings. 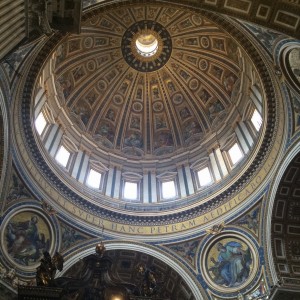 As I gathered my bearings, I realized that the basilica was much cooler than the blazing outdoors, despite being filled with people. The marble on the floors kept the ground cool, as did the lack of low-to-the-ground windows. Unlike the touristy feel of most of Rome, including churches, this building felt meaningful and weighty, undoubtedly due to it’s magnificent construction and design. Of all my memories in Italy, this single building stands out in my mind.