Remment Lucas “Rem” Koolhaas is a dutch architect, architectural theorist, and urbanist. Koolhaas is considered one of the most important architectural thinkers and urbanists of his generation.  In 2000, Koolhaas won the Pritzker Prize, which is  awarded annually “to honor a living architect or architects whose built work demonstrates a combination of those qualities of talent, vision and commitment, which has produced consistent and significant contributions to humanity and the built environment through the art of architecture.” 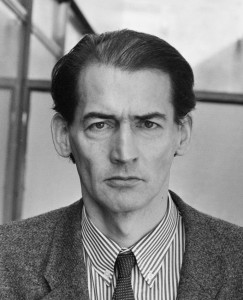 Koolhaas has his own architectural firm, founded in 1975 with Greek architect  Elia Zenghelis, along with Madelon Vriesendorp and Zoe Zenghelis. The firm is called the Office for Metropolitan Architecture (OMA). One of the first notable projects completed by OMA was the Netherlands Dance Theater. Completed in 1987, this building was the first to showcase Koolhaas’ ideas and vision. 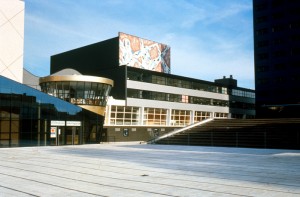 The theater has a structure of steel beams and girders, using metal cladding with sheet rock covered with stucco, marble and gold foil. The roof has a self-supporting structure of a double layer of trapezoid folded sheet steel. 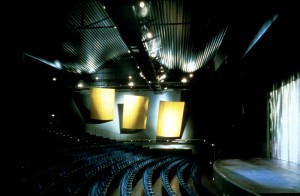 I really like this building because of its modern leanings. The gold foil adds a unique element that looks cool and ties in to the other features of the interior.

One thought on “Rem Koolhaas”