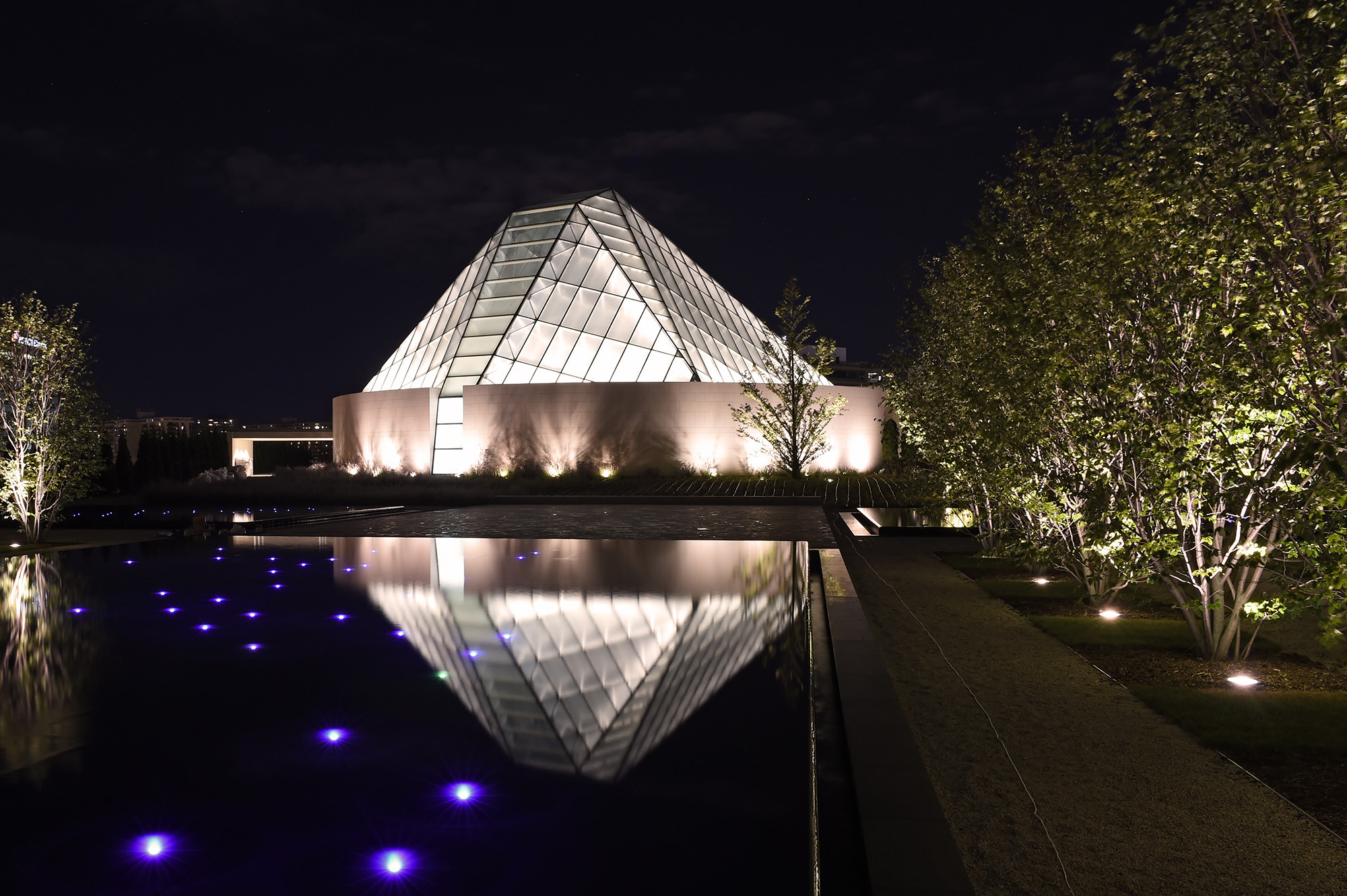 The Ismaili Centre in Toronto, Canada was built in 2014 and was one of the last major projects Charles Correa worked on before his death a year later. Ismailism is apart of Shia Islam and each center functions as both a religious and social space for the community. This centre is one of six Ismaili centres around the world. Each one is architecturally unique and seeks to foster an understanding between diverse peoples, communities, and faiths. 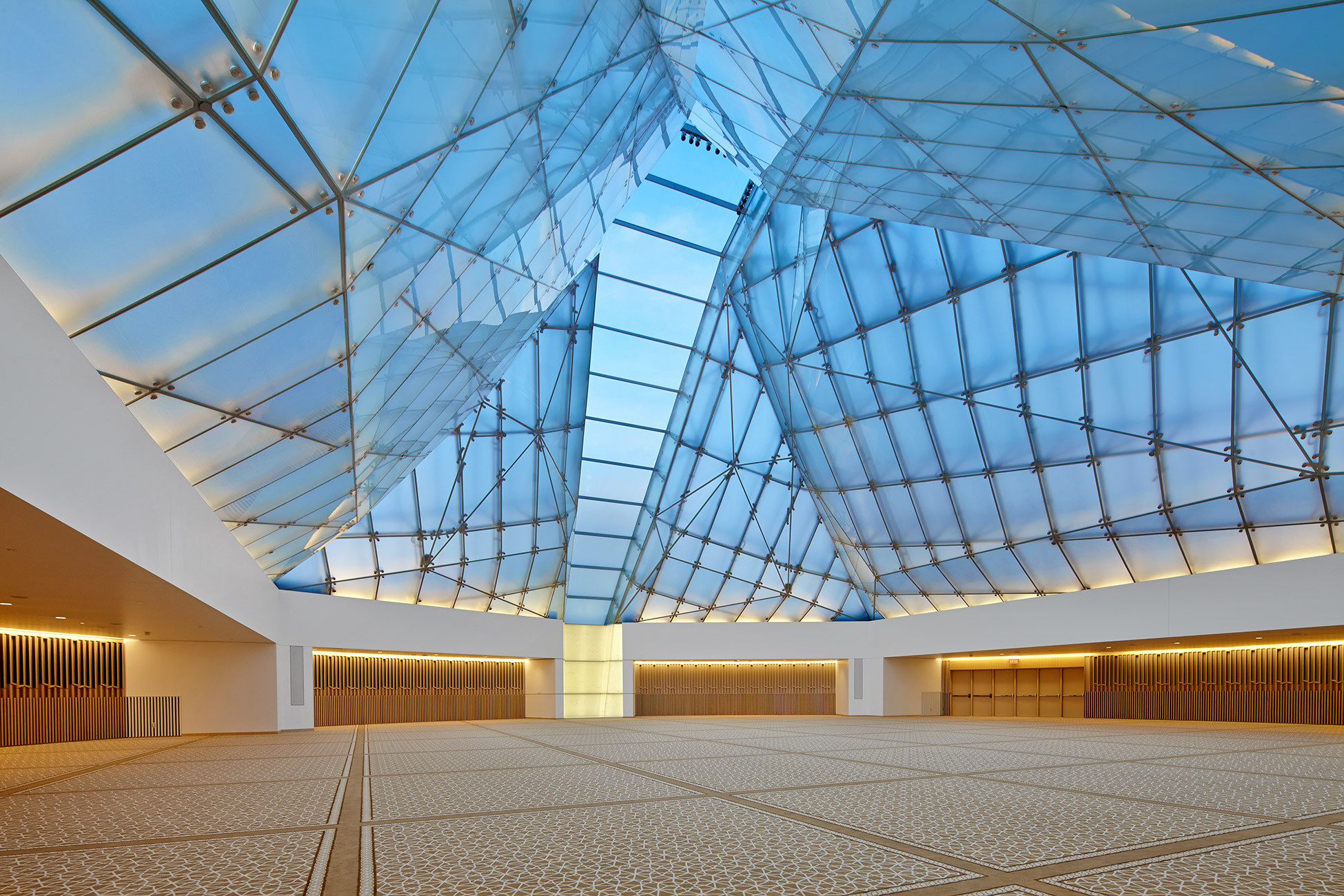 When Charles Correa designed this building he wanted to combine traditional Islamic architecture in contemporary Canadian context. He did this by keeping the design modern with lots of glass and sleek metal but incorporating Islamic symbolism through the glass dome and orientation of the building. The dome itself is an engineering beauty made of two layers of high-performance glass that are fritted to deflect the heat of the sun. The inside has a large prayer hall as well as other rooms for social gatherings and spiritual contemplation making the whole building a bridge between Islamic and Canadian culture. 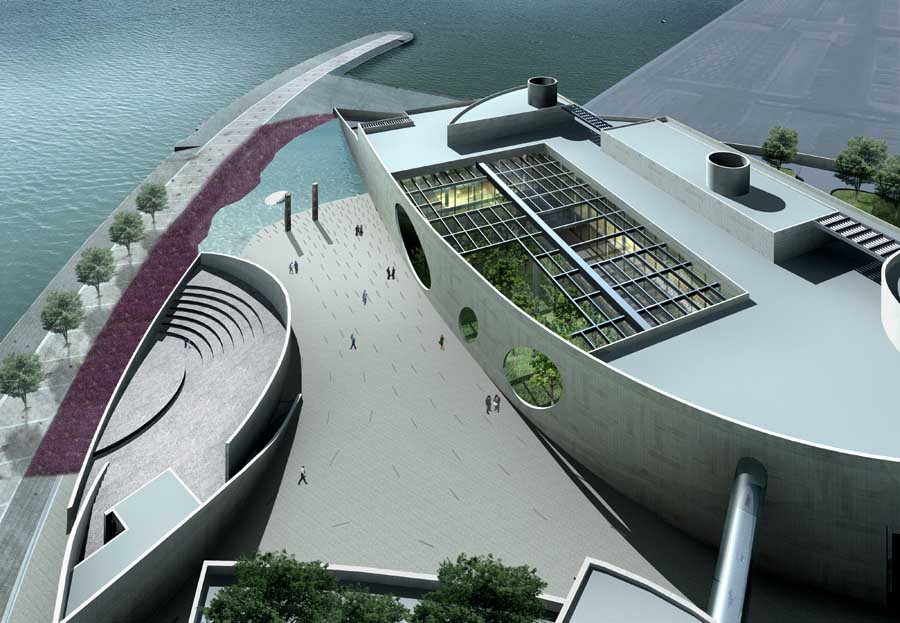 This building is actually a state-of-the-art biomedical research facility created around the need therapy through beauty. Charles Correa described the inspiration for the building as “Architecture through sculpture. Architecture as beauty. Beauty as therapy.” It was built in 2010 in Lisbon, Portugal and made of almost entirely of limestone and glass. 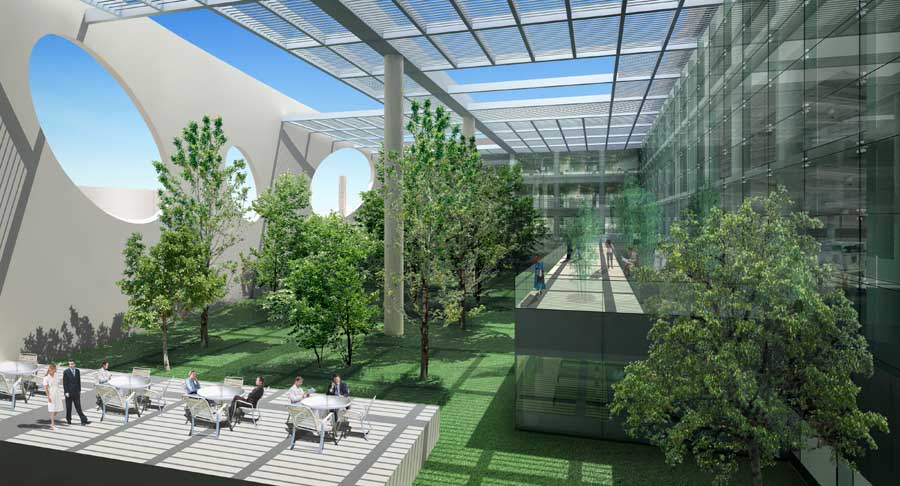 The building is one of Charles Correa’s favorite designs and he says that he is proud the building is a research facility and that its beautiful design can actually provide some relief to it’s inhabitants. The spot is was built on was picked specifically for its historic significance. That piece of coast in Lisbon is where Henry the Navigator, Vasco de Gama, and other Portuguese explorers left on their journey into the unknown. That brave discovery spirit is what the entire staff of the Champalimaud Centre hope to replicate in their endeavors.

I think love that this building is a medical center. I think that the idea that architecture is sculpture and can be therapeutic is a neat twist that both adds character to the building and helps people at the same time. It adds significance to the building for me. I like that Charles Correa always tries to make his buildings environmentally friendly without taking away from the feel of the building. 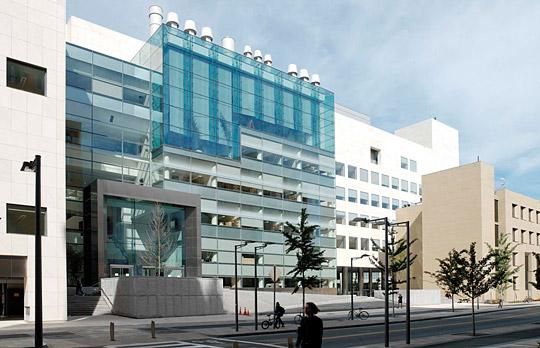 The MIT Neuroscience Building was created jointly by Charles Correa Associates and Goody, Clancy, and Associates in 2005. It is situated in the middle of MIT’s main campus in Cambridge, Massachusetts and is the largest neuroscience center in the world, at 411,000 square feet. The structure is of modern design and made of limestone and glass. 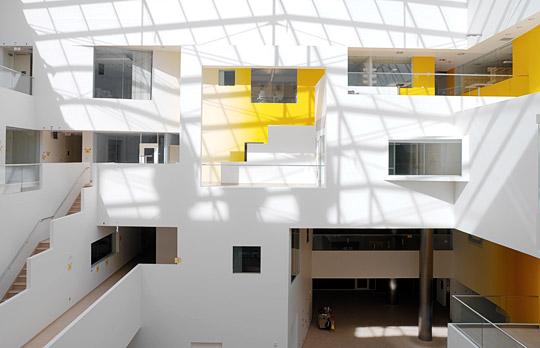 The neat thing about this complex is that it sits on top of an active freight rail and is built around a five-story atrium. That means that it has to be specifically designed to offset the noise and shaking from the rail as well as encapsulate a functioning atrium. Also, the building was designed to be environmentally friendly. It has a 70% reduction in potable water use compared to the old facility. It also has gray-water recycling for toilets and has a storm water management system to improve the health of the nearby Charles River.

Personally, I think this building is interesting but not my favorite of his. That said I think it is really neat that he was able to keep it environmentally friendly and impressive that it was all built on top of an active freight rail. It does feel like a university building so I think that it does its purpose well. 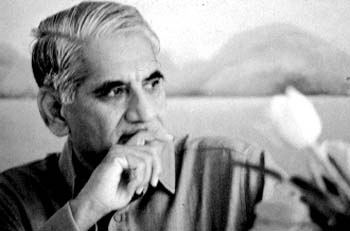 Charles Correa was an Indian Architect, urban planner and activist who is credited with bringing modern architecture to post-independence India. He was hailed for his ability to blend modern architecture with traditional Indian methods and materials as well as his sensitivity to the needs of the urban poor. In 1972 he was awarded the Padma Shri, the second highest civilian honor, and in 1984 he was awarded the Royal Gold Medal for Architecture by the Royal Institute of British Architects. 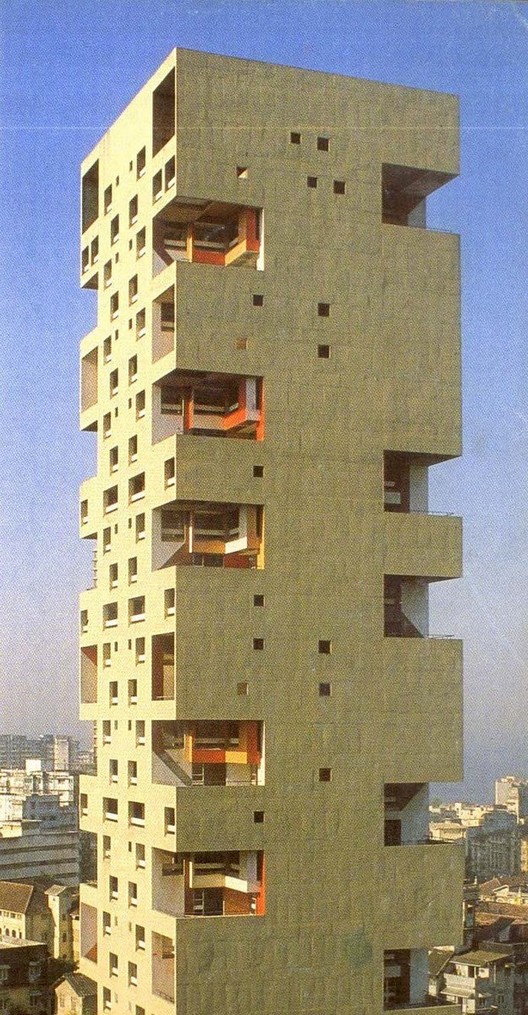 The Kanchanjunga Apartments were built in Mumbai, India in 1983 as a solution to the demand for luxury apartments in an overcrowded city. They exhibit a combination of the traditional bungalow style apartment with the edgy geometric construction of a more modern building. The geometric stacking design creates a protective layer around the inner apartments to protect the main living areas from heavy monsoon rains. 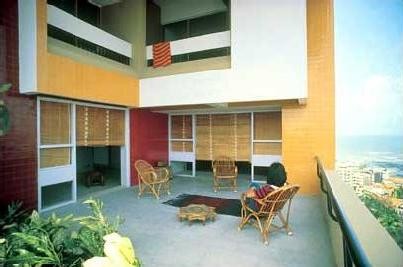 Each of the 32 stories houses its own separate apartment. The outside is reinforced concrete while the insides are brightly painted and include wooden fixtures. The apartments are aligned so that the wind can travel through them creating their own self cooling system and making them more environmentally friendly. I grew up in Colorado and as a child this was one of my favorite places to visit. To me it was a place right out of a storybook, a city carved into the mountain. Mesa Verde, Spanish for “green table”, was home to the Ancestral Pueblo people for over 700 years, from 600 to 1300 CE. The construction of the cliff dwellings marked a shift to sedentary agrarian life. Cliff Palace is one of the largest cliff dwellings in North America and is only one of the 600 cliff dwellings in Mesa Verde.  It was continuously added to from 1190 CE through 1260 CE. The whole place was abandoned after 1300 CE for changing environmental factors and remained that way until they were rediscovered in 1888 CE. Cliff Palace was constructed out of sandstone, adobe mortar, and wooden beams and held about a hundred people. They used to be colorfully decorated but they have eroded over time. When the Ancestral Pueblo people left for New Mexico and Arizona, they took everything with them leaving only these empty buildings behind. 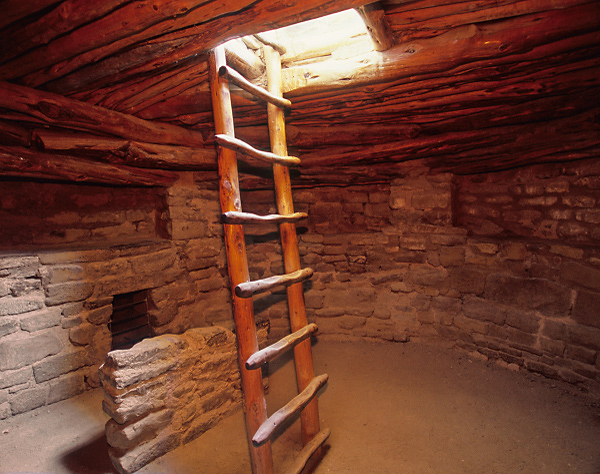 Last Christmas, my family went to Washington D.C. to visit my aunt and uncle. While we were there, we were able to see many of the historic monuments and museums all around the capital, but none of them compared to the Lincoln Memorial for me. Standing next to this towering statue of our 16th President of the United States and being able to read his own words was both humbling and inspiring. The history that is symbolized there is palpable and made me stand there and appreciate my nationality, which I feel is something a lot of Americans do not normally think about. 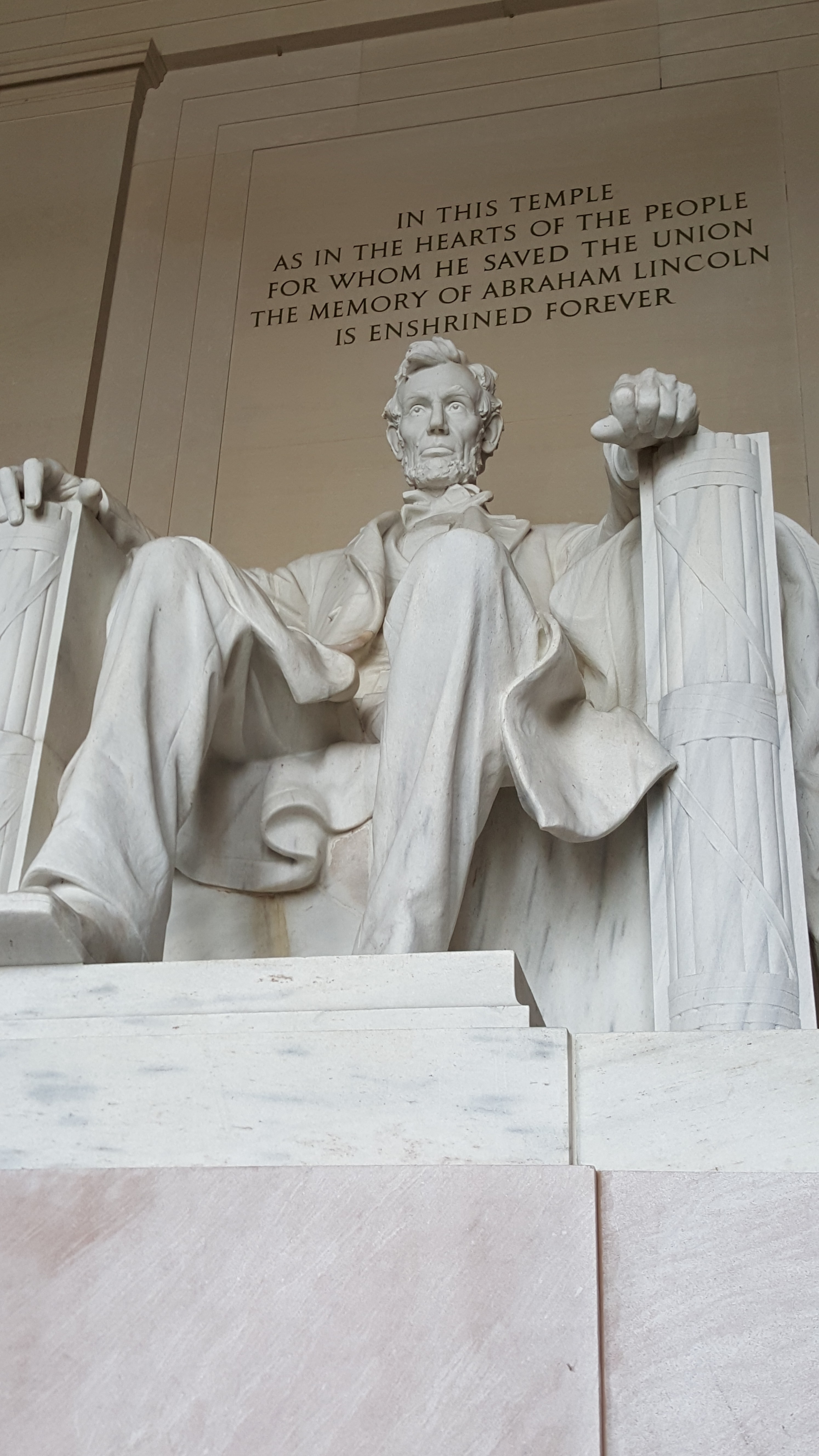 The Lincoln Memorial was designed by Henry Bacon and is in the form of a Greek Doric Temple. It was finished in 1922 and has 36 fluted Doric columns to symbolize the 36 states in the Union at the time of Lincoln’s death with their names inscribed over them. The inside of memorial contains a carved inscription of Lincoln’s second inaugural address and of his Gettysburg Address as well as murals depicting personified Unity, Fraternity, Charity, Liberty, Immortality, Justice, and Law. The memorial is depicted on the back of the five dollar bill as well as the back of the penny. The Lincoln Memorial is also the spot where Martin Luther King Jr. gave his historic speech “I Have a Dream”  in 1963.

I added a picture of Lincoln’s speech above because I think it really captures the tension, fear, and hope that Americans must have been feeling after the Civil War. Those same feelings reappeared again during the Civil Rights movement and are cropping back up in our continually more divided nation once more.

While studying abroad in Belarus, we took a weekend trip to see several castles around the country. Nesvizh castle stood out to me from the others because of its  beautiful coloration and impressive rounded courtyard that makes the buildings feel like they are all looming around you. I also really liked the rich history of this particular castle as it changed hands of many different empires and its combination of different cultures in its architecture.

The Nesvizh castle was originally the home of the the Radziwiłł family, a noble family prominent in the Grand Duchy of Lithuania. It also housed the government of the Second Polish Republic and was turned into a sanatorium for a short time. Sacked by the Swedes, Russians, and later the Soviet Union, the castle was renovated many times turning the originally medieval castle into a more Renaissance-baroque chateau.

As you can see, the inside of the castle is all beautifully decorated with a more Victorian era aristocratic design.  All of the floors are wooden with intricate designs that match the sculpted ceilings and there is a definite influence from Western Europe. Taken all together it has a dignified and overly ornate feel that leaves you fascinated.

The first time I went outside of the country was a study abroad trip to China. During that trip, the place that stood out to me the most was Tiananmen Square because there new and old building stand side by side. The Palace Museum that holds the Forbidden City and symbolizes Imperial China resides right next to the Great Hall of the People that houses the current government. 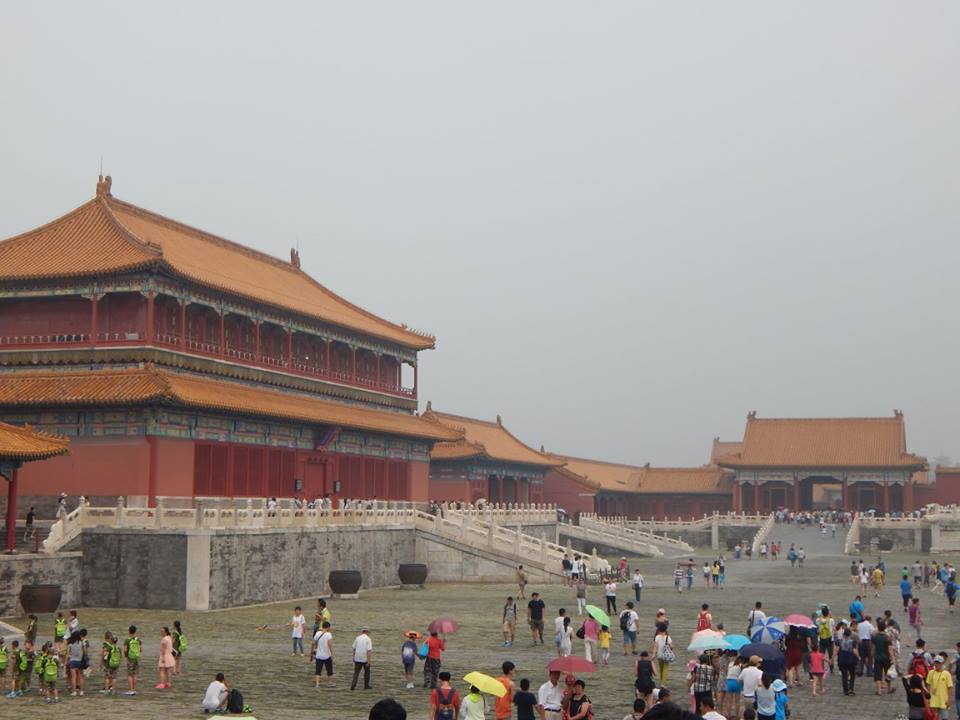 The Forbidden City was built during the Ming Dynasty and housed the Emperor, his family, and all of his important advisers from 1420 to 1912. It is built in traditional Chinese palatial architecture and was designed to sit right in the center of China’s capital, Beijing. The whole thing is symmetrical with all of the military advisers’ offices one side, all of the civil advisers’ offices on the other, and the Emperor and his family in the middle totaling 980 buildings all together. And yes if you are wondering that haze in the picture is smog.

The thing I love most about old Chinese Imperial buildings is their extreme attention to detail and patterns. The ceiling above is made entirely out of hand carved wood and is meticulously painted in repeating patterns. Also, almost everything has meaning: the statuettes on the rooftops tell the rank of the building; the arrangements of buildings in threes represents heaven; the yellow coloring represents the emperor. I just found it amazing how much thought was put into every design choice and the striking effect it has as a whole.