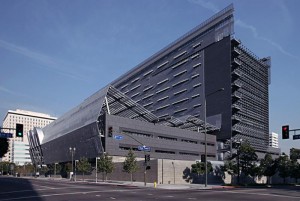 The building has a futuristic and environmentally friendly design, which actually won Thomas Mayne the 2005 Pritzker prize. There are 13 stories and 716,200 gross square feet for office spaces as well as an underground parking garage.

An interesting architectural design is the large “100” which is four stories high, on the side of the building. This is to represent which street they are on.

As with most Mayne buildings, the exterior is almost entirely glass which allows for a lot of light and the exterior takes a unique form. There are large open spaces and areas for community interaction. 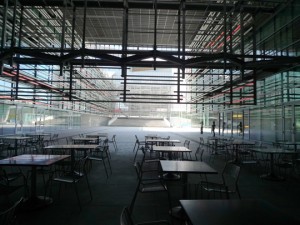 Out of most of Mayne’s buildings this one is actually my least favorite. While the style is still using glass, steel, and cement which are some of the materials Mayne is most notable for using, this building doesn’t make me feel invited or wanting to walk in (which could just be because it’s the Department of Transportation). I feel this building lacks that same charm Mayne’s buildings create. The grey colors used on the exterior I feel make the building appear  less welcoming. I do like the building still has a unique shape which makes it interesting to look at. The large “100” is a cool feature though and I have enjoyed learning about Thomas Mayne and what he has contributed to the architectural community.

One of Thom Mayne’s most notorious buildings which exemplifies his unique style is the 41 Cooper Square building in New York City. 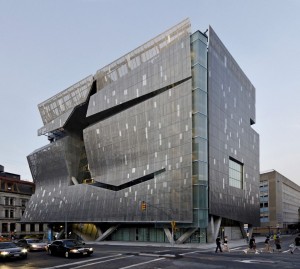 The 42 Cooper Square building was built in 2006 and finished in 2009. The building is nine-stories, 175,000-square-foot, and an academic center that houses the Albert Nerken School of Engineering. Mayne designed the building from the inside out, starting with a central atrium, referred to as a vertical piazza. 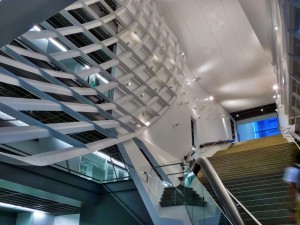 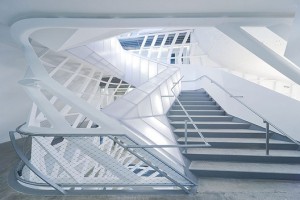 If you look at the stairs, you’ll notice they take different shapes. This was done purposefully. The discontinuity of the staircases was intended to promote physical activity and to increase meeting opportunities.

The building is mostly comprised of stainless steel and glass which allows for rooms to be filled with natural light in most spaces. 41 Cooper Square achieved a LEED Platinum Rating, the first for an institutional building in New York City.

I personally love this building and the way it makes me feel. I think the shaping of the stairs to encourage human interaction was clever and important. The obscure shape of the building is fascinating and compliments all the shapes on the inside. You can tell just through photos the amount of natural light this building receives which I really enjoy. I believe this is one of Thomas Mayne’s best work.

In 2013, Thom Mayne helped design the Perot Museum of Nature and Science in Dallas, TX. 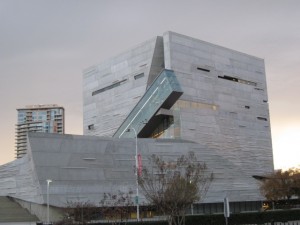 The building was designed to inspire awareness of science through an immersive and interactive environment. The way the building is shaped makes it come off as a floating cube over a landscape. 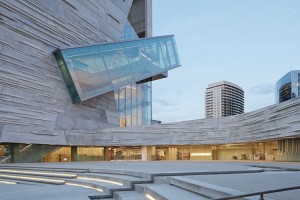 The building integrates a variety of sustainability including a rainwater collection system that captures run-off water from the roof and parking lot. The building has secured from the Green Building Initiative the highest possible 4 Green Globes. It obtained a rating of an overall 85% on the Green Globes rating scale and 100% for its design and its sustainable performance measures. 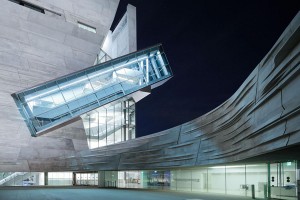 The Perot Museum of Nature and Science makes me feel curious to learn more, which I believe is a good thing considering it’s a museum of nature and science. The materials of the building are a bit different from what I believe people are used to Thomas Mayne using, but the unique shape captures his style perfectly. I like how the building looks at night as well, it is a building which stands out both light and day. I hope I have the chance to visit and experience a Thomas Mayne building in person.

Thom Mayne is an American architect who was born in 1944. Based in Los Angeles, Mayne is the principal architect for the firm Morphosis in Santa Clara, CA. 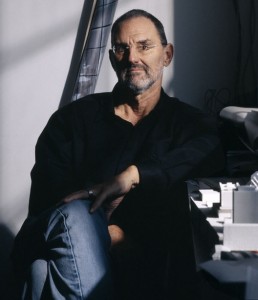 Thom graduated in architecture in 1968 at the University of Southern California and received his master’s degree at Harvard ten years later. Mayne is a founding member of Sci-Arc (Southern California Institute of Architectura) and has also won the Pritzker Prize in 2005. 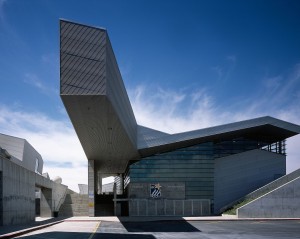 One of Mayne’s most notable works is Diamond Ranch High School in Pomona, CA. The style is known as expressionist modern and was created on a steep hillside which was once deemed unusable. Thom describes his approach to designs as experimental. Most of his works are known for their bold designs, striking a balance between sculptural and monolithic forms. This particular building includes lots of windows for light and an abstract form made from materials such as steel.

I enjoy looking at Mayne’s work because each building is unique and not the status quo for whatever its traditional purpose may be. His buildings make me feel curious, wanting to learn more about them and explore the interiors. I wish there was maybe another element to his design like more color, but they are interesting nonetheless.

When I transferred to OU the fall of my junior year, I was extremely nervous. I did not know many people and was worried I wouldn’t enjoy it as much as KU. I was already an ATO at KU though and was lucky enough to affiliate with the chapter here at OU.

When I first saw the ATO house here I was overwhelmed. This massive, beautiful building was like none of the greek houses up in Kansas. I remember first walking through the main doors and feeling a sense of relief because I knew this would become my new home. I made new friends there and learned an incredible amount about leadership and brotherhood.

This building has affected me by serving as a standing reminder of what it means to be a leader in today’s society. Being close to campus this house has been a place I could go to to relax, study, and enjoy hanging out with others. With my father being an alumni to this fraternity this has also been a place where my father and I can bond over our own experiences and grow closer. 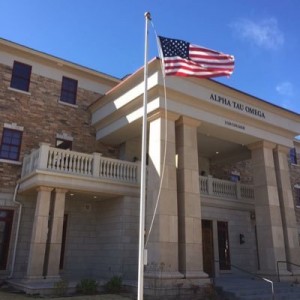 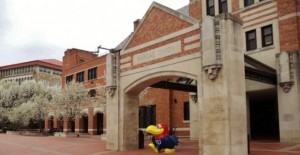 My sophomore year, I spent a majority of my time in the KU Memorial Union. My first impression wasn’t much of this building, as it all seems to blend in together with the brick walls and brick floors outside. Overtime, after learning the history of the building and all the best places to study, I grew to admire it greatly. The union actually caught on fire and burned most to the ground and was reconstructed to what it is today. I believe this building serves as a safe space for all students and represents an area where one can come to unwind while still being engaged with the KU community. 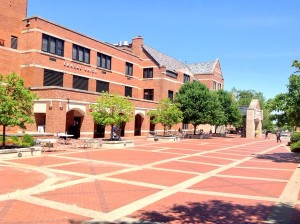 Because of my student leadership positions, I would be at the union all the time for events I, or others, were putting on. The inside of the union has been updated and modernized with comfortable seating and great places to study and hangout with other students. The most beautiful place in the union, in my opinion, is their ballroom. The ballroom hosts a wide array of events and never sees a dull day. 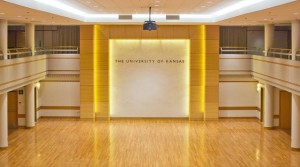 I am grateful for my time at KU for I never had a bad experience in the KU Memorial Union and always reflect fondly on the memories I created there. I hope to visit KU in the future and see the same union with the same charm I remember from my time there. 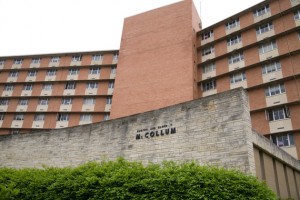 My freshman and sophomore year I attended the University of Kansas. During my freshman year, I lived in McCollum Hall, the oldest and largest student housing on campus. I lived in the 7th of ten floors and loved it. Despite being outdated and essentially falling apart, this dorm held some of the best memories of college. I met a lot of friends in the halls, studied in the laundry room, and watched movies in the lounge. 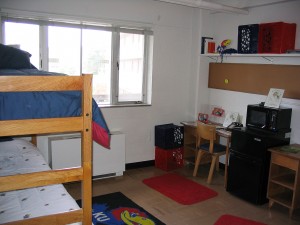 This was the inside of the room, and as you can see it was essentially a prison cell. When I first saw it, it was a shock to me I was to share this room with another person. It was a challenge, but one I was excited for. Over time, this building grew on me and seeing it after I moved out would still bring nostalgia. 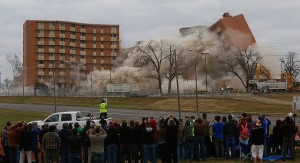 But last year they tore it down, which was extremely hard to watch because that was an entire year of my life vanishing before my very eyes. I hope the new dorm they built will bring as much joy to the other residents as it did for me.

This past summer, I interned with Southwest Airlines in Dallas, TX. The above picture is of their corporate headquarters. This building has meant a lot to me. It represented opportunity and aspirations for success. Each day I went there, was another day filled with exciting challenges and new opportunities. Interning with Southwest was an unforgettable experience and I always look at the building with great admiration.  This building has influenced me in a tremendously positive way and helped shape my future.

The building faces Love Field airport so every employee can see and be reminded as to what their mission is and also see the work they’re doing right there in front of them. The building is surrounded  with windows on each floor so you can easily see outside and look onto the airport runway.  This building is always filled with light and has made me feel welcome. 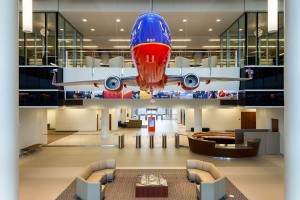