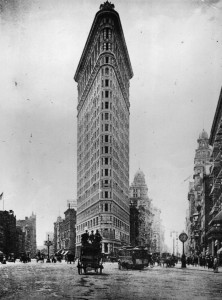 Nicknamed the “Flatiron” building for the piece of real estate that it occupies, so named as it resembles an iron. The original plans for the building included a more elaborate crown and a larger clock., and failed to include women’s bathrooms. The building forms a 25-degree angle. At the time of completion, in 1902,  this was one of the tallest buildings in New York City. 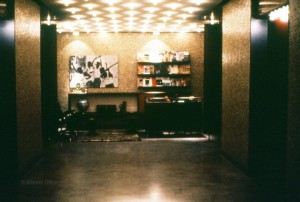 The Time Life building lobby was designed by Eames Office in 1961. Not only did they design the lobby but also created the majority of furniture pieces in house rather than purchasing. Some of these pieces such as the walnut stools pictured below are still in production. 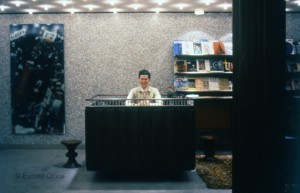 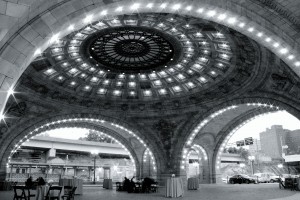 This is the only surviving rail station currently in use in the city of Pittsburgh, PA, and has been hailed as a symbol of the nation, by Brendan Gill of the New Yorker. This building opened in 1903 and was only built to serve the needs of one rail line. For that reason, the name “union Station” is inaccurate. 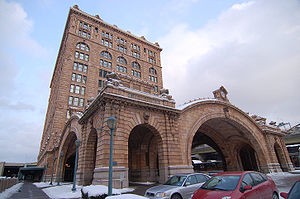 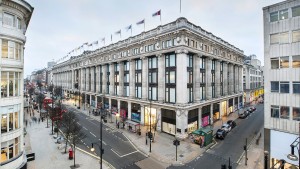 This is one of many department stores designed by Daniel Burnham. Originally designed to hold 100 departments, the building was completed in 1909. The building is five stories with three basement levels. This is an early example of steel framed architecture in the UK. Here we can see that there was a strong classical influence with the rows of columns that surround the building. 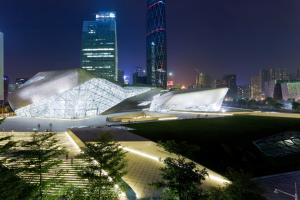 Hadid described this building as smooth stream pebbles. It certainly shines like them! When I think of an opera house, I always think of the Sydney, Australia opera house. Now I like this one better! 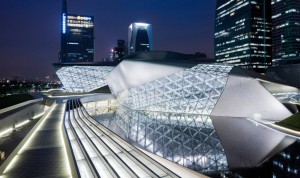 It was designed to fit in perfectly with the riverside. The area it is located in is urban China, and it is a very drab urbanized part. There was an ugly, bare riverfront before this building. Perhaps the beauty about it is that it somehow manages to bring city-dwellers in touch with nature again.  As a musician, I believe that music and nature are a great pair! 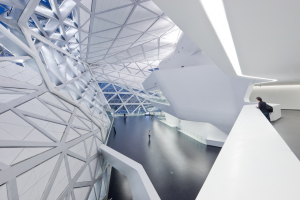 It was built fairly recently in 2010. One of the reasons it might not be so famous is because there is not a resident company that performs there frequently. It is still an excellent architectural work, and Hadid was a genius for seeing the potential in a bare area. The windows bring in so much natural light(or put out light at night), and everything is so intricate.

Expanding the Charlottenburg palace in the 18th century to make it the largest palace in Berlin, Knobelsdorff was commissioned by the wife of Frederick III, Sophie Charlotte, to add 2 more wings to the already 5 bedroom villa. Knobelsdorff made up for restricting some of the exterior ornamentation by concentrating his decorations on the interior. Focusing on lavish interior furnishings, and buildings within the gardens, he strayed a little from his Palladian style, but kept many of the rococo themes employed in his other works. 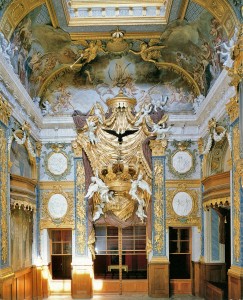 Considered one of his most important works, the Berlin Opera House, unlike any other of his projects was designed completely by him without the guidance of instruction of any King or royalty. While I was visiting Berlin, Greek large column faces with triangular roofs seemed omnipresent throughout the city. From governmental buildings to the Brandenburg gate, these examples of Palladian architecture are noted everywhere throughout the city. The exterior, an ornate representation of Palladian architecture fit in well with many of Berlin’s older buildings, but the interior was designed to be much different. With three different levels, all decorated differently, with bright colors and ornamentation along the walls. The Apollo Hall, spectator viewing area, and the stage could all be combined into one large room for festivities, a major architectural feat for the 1700s. The opera house was burned down in 1843 and also suffered heavy damage from bombings in WWII, each time it was rebuilt with Knobelsdorff’s specifications in mind, but today has a redesigned interior. 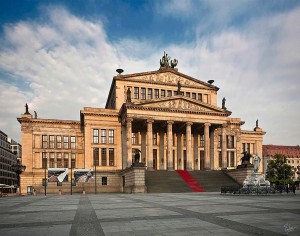 Addition to London’ National Gallery– This 120,000-square-foot addition to London’s National Gallery puts a contemporary spin on the main building’s neoclassical architecture. The building opened in 1991 and houses an important collection of Italian and Northern Renaissance paintings, as well as space for traveling exhibitions and a 350-seat theater. 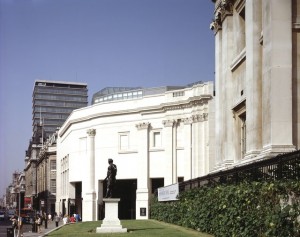 Children’s Museum of Houston: This building was completed in 1992. The colorful structure components of classical architecture. It houses room for permanent exhibitions, plus classrooms, an auditorium, an art studio, offices, and a gift shop. 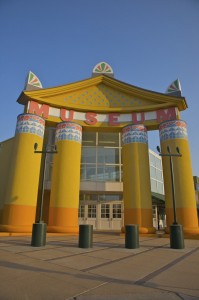 After looking through all the work of these fantastic architects, I found that this appealed to me most greatly.  I really enjoyed the pretty colors and the fun shapes. I greatly enjoyed seeing the more creative aspects of postmodern architecture.

The Frederican Rococo design is noted in not only the Sanssouci palace, but in many of the buildings and features of Tiergarten Park, located in Berlin. This park’s straight and geometric pathways with organized flowerbeds and hedges coupled with naturally winding streams, ornate fountains, and colorful structures is an example of how Knobelsdoff clashed old school Palladian architecture with a newer Rococo style. As an order to the King, Knobelsdorff was not allowed to uproot any existing trees and was not allowed to plant trees in geometric formations as observed in many Italian villas (with rows of trees lining a road or walkway). This allowed for a more natural feel for the park and symbolized how mankind with all of our precisely straight lines (Palladian) can comingle with the nature’s unpredictable curves and colors (Rococo). 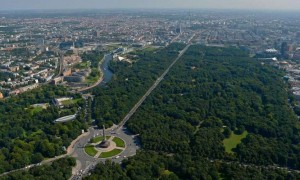 Waterloo International Station is a transport structure designed by the Grimshaw Architects. It is a railway station located in London, and was completed in 1993, later opened in 1994, at the cost of 120 million euros. 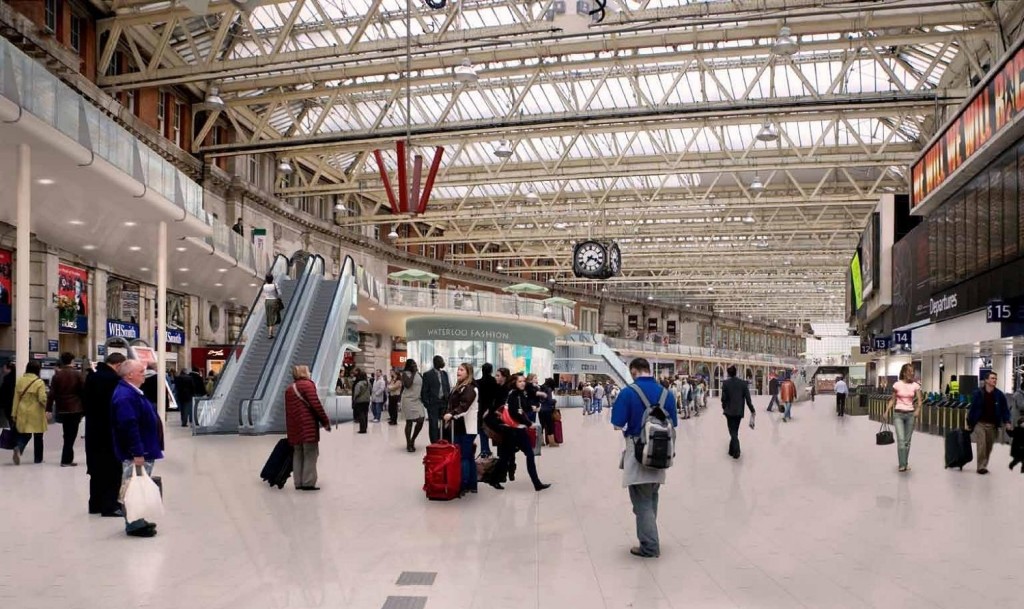 The railway has won numerous awards, including the European Union Prize for Contemporary Architecture, as well as the Royal Institute of British Architectures’ Building of the Year award. 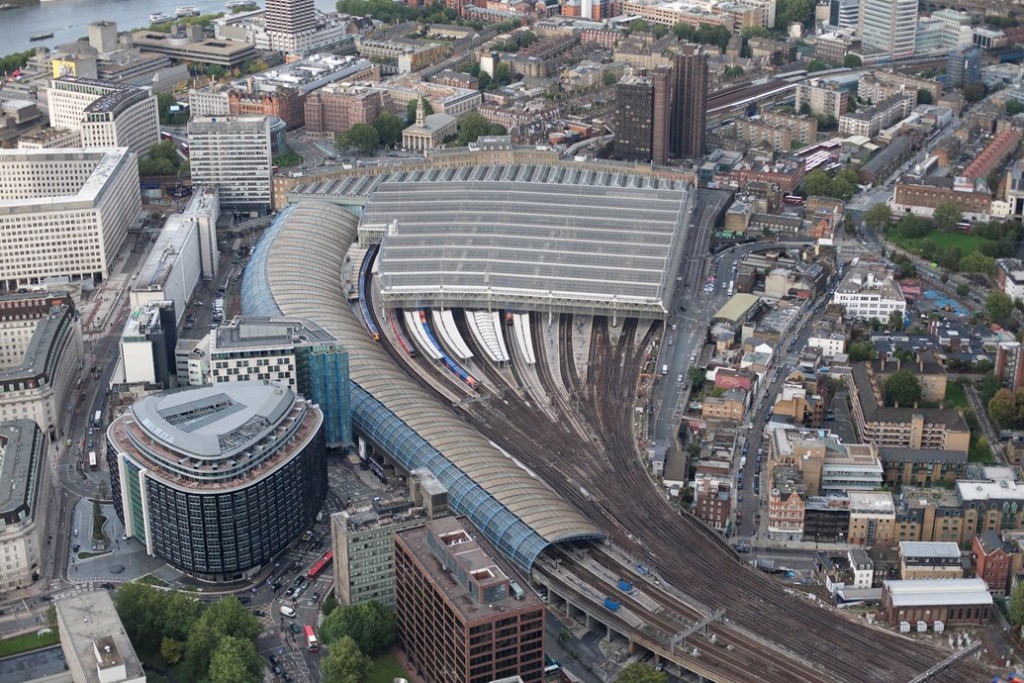 The Grimshaw Architects, along with their contracted partners, wanted to design something innovative for its time. Initially, that meant constructing a “cable stayed structure,” but that idea was later abandoned in favor of a more innovative idea: an arch-based trajectory, which was not the norm in the 80s.